All about the Stabyhoun. First, listen to hear how to pronounce, STABYHOUN. 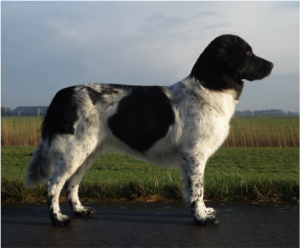 The Stabijhoun is a very versatile dog. He is an all-round hunting dog and keeps the yard free of mice and rats. He guards the yard and has a good reputation as a mole and polecat catcher. The previously common larger type Stabijhoun pulled the milk carts, while the smaller type made his name as a professional mole catcher. This talent made the Stabij popular with the poorer farmers and farmhands. The moleskins were worth a lot of money as linings for the wrists of sleeves and other items. The Stabijhoun was carried in a basket on the bike so that they could cover long distances. The Stabijhoun is related to the Drentsche Patrijshond and Heidewachtel. The Stabijhoun probably owes its name to its versatility. The word Stabijhoun is derived from the words ‘sta mij bij’ or ‘stand by me’, while Houn is the Frisian word for dog and is pronounced "hoon". The Stabijhoun originates in the Frisian forest area. In the early 20th century Stabijhoun and Wetterhoun were regularly crossbred with each other. Thereby, the unique varieties of each were threatened to be lost. In 1938 a group of enthusiastic people of the Kynologenclub Friesland started purifying the two breeds again and in 1942 both breeds were officially recognized.

Important names in this process were: J. Bos, T. van Dijk, B. de Graaf and W. Hoeksema. The first standard was dated February 10, 1944. In 1947, the Dutch Association for Stabij and Wetterhounen (NVSW) was established. The NVSW represents the interests of The Frisian Breeds since 1947. The population of the Stabijhoun is currently (2013) more than 6000 dogs worldwide.

The general appearance is very important. It briefly says how the Stabij should look. Does everything appear balanced; the head with the body, the front with the rear, etc.

Functionally and powerful built pointing dog. The body is slightly longer than its height at the withers. The overall picture is neither too robust nor too fine. The skin should fit tightly. The feathering on chest, collar, forelegs, trousers and tail gives the Stabijhoun the impression of being long-haired, but the coat should not be excessively long. Sex should be unmistakable.

The Stabijhoun should be slightly stretched. This means a little longer then high. About 10% is a good guideline. It means that a dog from 50 cm high, should be approximately 55 cm long. We measure the length from the breastbone to the sit bones. T The length of the front legs (from the floor to the elbows) needs to be equal to the length from the elbow to the withers.

IMPORTANT PROPORTIONS: The body is slightly longer than high. It is important that the harmony and balance associated with a functional body is in accordance with the size of the dog. Elbow is approximately equidistant from ground to withers.

The Stabijhoun is very independent and likes to go his own way. The Stabijhoun is affectionate with a distinctive friendly nature to children, but can also be very headstrong. Patience and a consistent education are essential. In the house or in the yard, the Stabijhoun is a quiet but vigilant dog. With strangers or in unfamiliar situations, Stabijhoun may be reserved at first, but should not be afraid.

The head is a very important part of the breeding standard. Especially in his head, the Stabij is differentiated from other (hunting) breeds. The male should have a slightly heavier (but not too heavy) head and the female, a more refined head.

The length of the muzzle should be as long as the length of the skull. In the real world, most of the Stabijs are a bit shorter in muzzle. The muzzle starts at the point of the nose and ends at the transition to the skull, between the eyes. The skull starts where the muzzle ends and continues to the occiput, which you can feel as a knot on the skull. The slope of the stop must be moderate.

The Stabij eyes need to be level in the head versus the slight upward angle of the Wetterhoun eyes. In the breeding standard is written a round eye, but it shouldn’t be too round, but more oval. The eyelids need to fit nicely around the eyeball; drooping eyelids are undesirable. You should not be able to see the third eyelid or the haw. The rim of the eye should have good pigmentation and the eye must be well set (neither protruding or deepset).

The Stabij ears are set fairly low. Auricle so little developed that ear flaps hang closely, without a fold at the base, along the head. Not admitted are ears with a strongly developed auricle which do not fold directly at the base of the ear, but further down, so that they do not hang flat against the head. The ears are moderately long and have the form of a mason’s trowel. The feathering of the ear is a typical characteristic of the breed: rather long at the base of the ear, decreasing in length gradually, the lowest 1/3 part of the ear covered with short hair. The long coat must be straight; slightly wavy is permitted, but curled is objectionable.

We strive to deliver a level of service that exceeds the
expectations of our members.

If you have any questions about our volunteer services, please
do not hesitate to contact us.