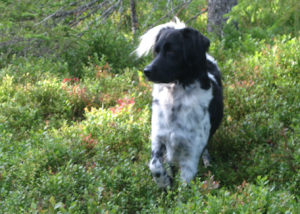 A Dutch all-rounder is shaped

Staby originates from Friesland and in particular from the Frisian forest area, a region in the southeast and east of Friesland. The breed has long been known in these parts but has only become more famous since the sixties outside Friesland. Already in the nineteenth century in various texts (eg Joost Halbertsma, Waling Dijkstra and Nynke fan Hichtum) reported “Bijke” which was described as a “long-haired piebald”, including “a child’s friend” and a “good hunting dog”. The ancestors can most likely be traced to the span joel (or spaniel), who had come during the Spanish occupation to the north. There is probably a strong relationship between the Staby, the Small Munsterlander, and the Drentsche Patrijshond. Staby were used for hunting moles, rats and skunks, as a watchdog and as a pest exterminator in the yard and around the house. They were also occasionally trained as a hunting dog for wild hare and upland birds. In the latter case, it was mainly a matter of hunting by poachers because the Staby was not a dog of the nobility, but the small farmer. The Stabyhoun was originally the dog of the “little guy”, the day laborer farmers or small landholders. It is a very versatile dog that is now mainly a companion dog. The breed was recognized by the Dutch Kennel Club in 1942, and has been an AKC-FSS breed since 2006. The Stabyhoun belongs to Group 7, Pointing Dogs within the FCI. An alert and curious dog.

The name Stabyhoun can be translated into the words “stand by me”, and this refers to their multipurpose. In Dutch, we say stabijhoon, whereas “houn” is the Frisian word for “dog”.  Stabys are independent. Some people call it cockiness, others call it stubbornness or obstinance. But, in fact, it is independence, and that is something that is deliberately bred. The farmers wanted a dog that could work independently. And that property Stabys have retained still today. In case of insufficient and/or inconsistent guidance, a Stabyhoun can develop into a difficult and unstable dog. With proper guidance, you will have in a Staby, an adorable dog and a great friend for life.

Stabys are very inquisitive. A nice feature, but at the same time they can also get into trouble. Generally, they expect the boss to offer a helping hand. So always pay attention to what a Stabyhoun is up to because with their inquisitive nature they also can fairly quickly find themselves in a difficult position.

Overview of the Stabyhoun population here and abroad

We strive to deliver a level of service that exceeds the
expectations of our members.

If you have any questions about our volunteer services, please
do not hesitate to contact us.